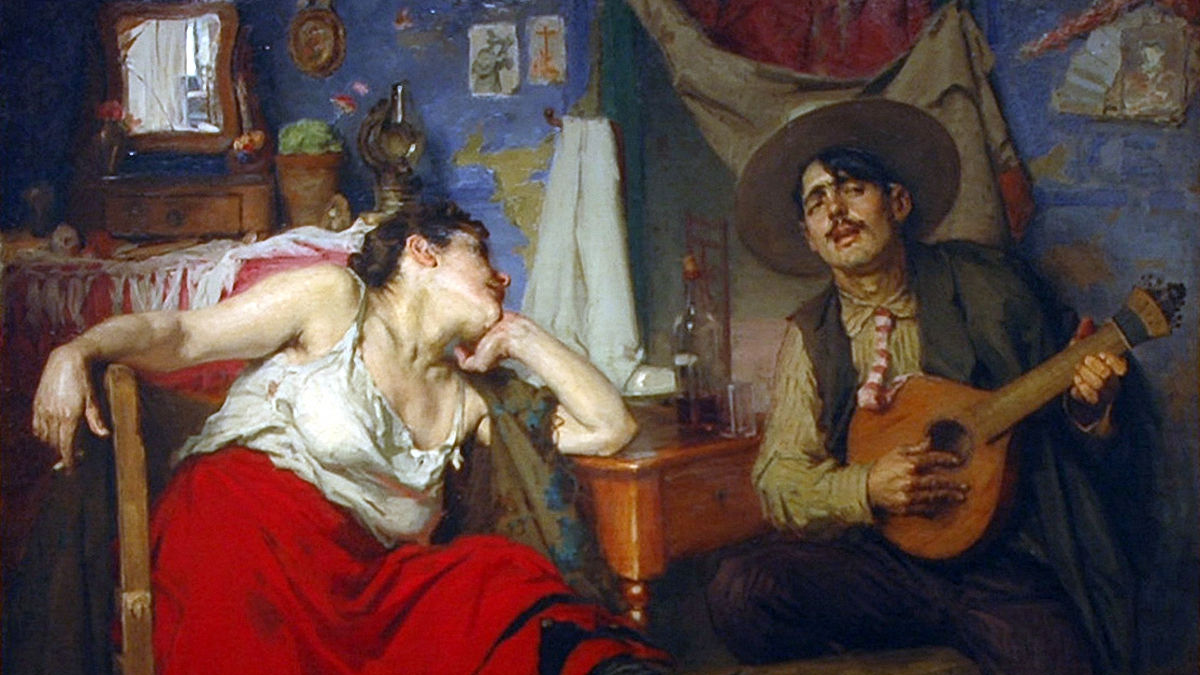 The previous King had been assassinated in 1908, along with his designated heir. The monarchy itself fell in October 1910. Fado lost its powerful protectors and came directly in the firing line in the turbulent republican period that followed. The painting by Malhoa was taken out of the country, and wasn’t shown in Portugal till several years later.

Fado had some defenders, especially on the anarchist Left. But many intellectuals - both Liberal (and thus at this time also usually colonialist) and Catholic (often moral revivalists), saw it as a source of corruption and weakness.

Fado is a fusion music with many international influences, a not untypical thing to find in a big port city like Lisbon (think of New Orleans Jazz and Buenos Aires Tango). But Portugal’s smaller cities and countryside are also rich in musical traditions. So for Portuguese nationalists there was plenty of other authentically Portuguese music to raise up in the place of Fado, which they saw as a shameful symbol of weakness and criminality.

After the military coup of 1926 Fado was attacked with renewed efficiency, and this only increased after the dictatorship of Salazar (a puritanical Catholic) got underway, so that by 1934 the original Portuguese Fado was all but wiped out in Portugal itself.

Fado's long road back to recovery

The subsequent revival of Fado and the attainment of its present revered and highly popular position in Portuguese culture is an epic tale too long to relate here. Amália Rodrigues was a key player in the 1940s 50s and 60s.

But there was a speed bump in this recovery after the Revolution of 1974, where it came in for strong left-wing criticism for a while. Fado was, ironically, seen as too closely associated with the dictatorship, which Amália and other fadistas had had to hobknob with in public as the price of being allowed to perform.

More damagingly, the public had fallen out of love with Fado, because with the gates of censorship down a massive tide of Anglo-American pop and rock swept into Portugal, taking all before it.

Not till the early 1990s did record companies realise there was still a market for Fado, and start making records again.

The singer Mísia, performing here with António Chainho on the high-pitched Portuguese guitar, is credited by Manuel Halpern with leading the Fado revival in the 1990s, and convincing record labels to support it.

Re literary quality, according to Nery (see below), one thing the aristocratic fans brought to Fado was improved words. They soon started penning sophisticated lyrics themselves, and got their low-class protégés to perform them.

Amália met this quality criticism decisively, by setting poems by esteemed Portuguese poets such as Luís de Camões (1524 to 1580) to Fado tunes. This approach has continued, with today’s Fado stars including in their repertoire songs built around poems by poets such as Fernando Pessoa (1888 to 1935).

Here is Pessoa’s gentle poem Amigo Aprendiz, which is about trying to establish enduring love without overwhelming or taking away from the other person. The singer is Rodrigo Costa Félix, with Marta Pereira da Costa on the high Portuguese guitar.

Here are the words, as sung - in other words with some lines repeated, as singers often do.

Note: As Pessoa died in 1935 his work is now out of copyright so can be quoted in full here.

“A History of Portuguese Fado”, by Rui Vieira Nery, translated by David Cranmer, 2012, first English edition. This is hard to get hold of, but easily the best English source. Tells the story from the very beginning. Nery won both the Amália Rodrigues award and got the Portuguese equivalent of a knighthood.

Journalist Paula Moura Pinheiro talks to art historian Nuno Saldanha and Sara Pereira, the director of the Museo do Fado in Lisbon, about José Malhoa’s painting (in Portuguese - but lots of pix and Fado guitar!). If the link above doesn't work, this one at RTP should Visita Guiada - Pintura "O Fado" de José Malhoa (Museu do Fado) - they made the programme.

Historian Rui Vieira Nery, talking in English about the early radical Fado of the lower classes, a lost tradition. This pre-dated the 1926 military coup, and the later cleaned-up Fado associated with Amália that emerged after World War II.

Meta: too positive about Fado?

Note: I originally posted this as an answer to a question on Quora. I have included more lyrics here, and swapped in a different version of Mísia singing "Noite" - this one is the album track but with the words in Portuguese on screen. Quora had an live performance from Portuguese TV, but with no lyrics.

The question on Quora was Why do some left-wing Portuguese intellectuals look down on Fado? According to them, it has a very poor literary quality and it is musically indigent.

I did get several replies, mainly positive fortunately. But one took me to task for not paying enough attention to Fado’s role during Salazar’s ‘Estado Novo’ dictatorship period, when the regime switched from repressing Fado to exploiting it for their own ends. In which they were successful - which is why some in the old left generation still don't like it.

So I did feel it necessary to give the other side of the Fado experience in my response, which is as follows:

There are just so many things I don’t know.

This is difficult to write about as an outsider, because I don’t feel the strength of emotion that many of the Portuguese involved do. Portugal has not had a South African style “Truth & Reconciliation” process, where PIDE informers and torturers would have come out into the open. It would be difficult to do, because there are also the wars in the colonies to consider.

I also didn’t say much because the original question mentioned “left-wing Portuguese intellectuals” in a dismissive way, and suggested snobbery. The victims of the dictatorship included all sorts of ordinary people who weren’t in this elevated category. They may not even have been literate. Some victims or those who remember them may find all this adulation of Lisbon Fado and the modern Amália cult very unjust. And look down on Fado. But not for reasons of intellectual snobbery.

Maybe it is wise to leave these past crimes and betrayals alone. Let time heal, let God who knows all judge, concentrate on the now, and so on. But there will be people who still intensely dislike Fado because it was a money-making asset and an international PR cover for the dictatorship. I just don’t know how many feel that way. And I’m reluctant to write about it without being sure.

I suspect that the pre-1974 history of Fado is being airbrushed, cleaned-up and made more neutral. But I don’t have enough knowledge of the culture or language to know just how inaccurate the story is that is being handed down.

For example, I haven’t seen the musical about Amália by Filipe La Féria, which seems to be aimed at Portuguese not just tourists. Was it accurate?

I’ve gone with the orthodox Amália-as-heroine line in what I’ve written above. It must be acknowledged that she played a big role in saving the music. But at the same time the previous generation of Fado performers were being suppressed. There’s a big discontinuity in the tradition.

But some of the original Fado was saved and transmitted into the present day musical form. The figure of Amália tends to unjustly blot out the other personalities involved.

I think but don’t know that the majority of Portuguese think of her positively, and agree with her posthumous honours. But my saying that the post-1974 criticism of Fado is just a “speed-bump” may be too weak, Maybe some hatred persists.

However, the last part of your comment is more positive. This music that has been there through long years of Portuguese experience may have succeeded in adapting and becoming a shared emblem, across political and class divides. But I’m not sure how the regions feel about Lisbon Fado being used as an emblem of Portugal.

In 1974 Mariza wasn’t yet aged 1, Cristina Branco was 1, Camané was 7 and Ana Moura not born. The old left generation may feel differently about what these singers now are doing for Portugal.