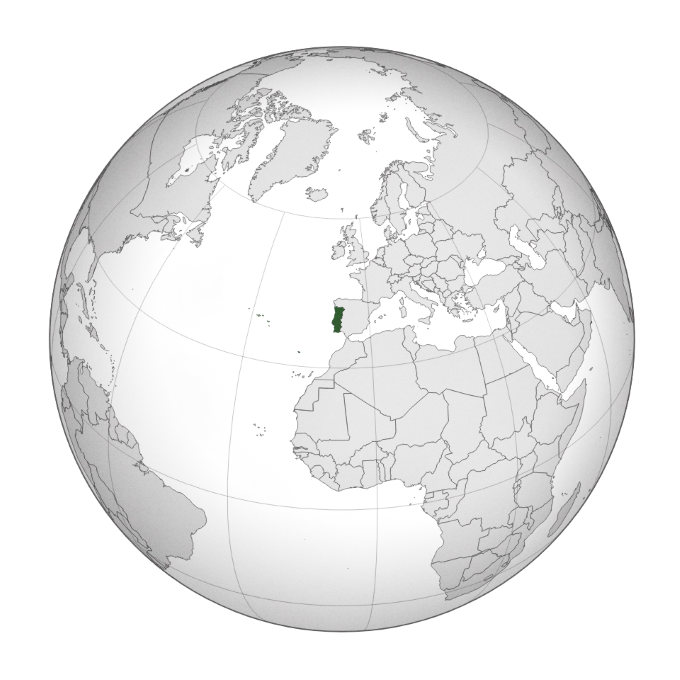 A number of highly unusual circumstances have combined to bring this about.

Portugal has had an eventful past. Portugal was the first European country to set up an overseas empire, and the last to leave its far-flung colonies. This took a revolution to achieve. So Portugal today is also a post-revolutionary society.

This is in the same way as the United States rather than Russia or Cuba, but the changes made in the period 1974 to 1975 have had deep effects on Portugal's institutions and culture - including especially music. And the effects continue to this day.

It should be said immediately that Portugal is a perfectly normal western society now. It's in the EU, NATO etc, it has an open economy, music festivals, surfers, a big tourist industry, a lot of personal freedom and a low crime rate. But it did have a very significant revolution in the period 1974 to 1975.

From a musical point of view this had a major impact, because of what went before as much as what came afterwards. Several active streams of popular folk music have been preserved right into the modern era. And their influence lives on, as they have been creatively combined with imported mainstream popular music.

Preserved in a fascist time warp

What came before the Revolution was a repressive dictatorship that went right back into the fascist era of the 1920s and 1930s.

Portugal's home-grown dictator Salazar helped Franco to power in Spain. Though staying formally neutral, he also assisted Germany with war materials (principally Tungsten) in the first stages of the second world war (when it looked like Germany was winning).

But Portugal had a curious kind of fascism, sometimes called clerical fascism. Salazar distrusted Franco, and disliked Hitler even more. The German leader's radicalism, focus on the future and weird Teutonic mysticism was far removed from Salazar's own deeply Catholic conservatism.

Salazar's regime, called the Estado Novo (New State) from 1933, created a curious backwards-looking society that sought to isolate the Portuguese people from modernity. From liberal and left-wing trends of course, but from almost all modern trends, including mass education and industrialisation.

Society was organised on corporatist lines, where individuals and businesses were represented by officially-controlled bodies and association. Singers for example had to be licensed, and lyrics submitted for pre-censorship. Music venues had to be licensed.

But this wasn't that different to other businesses, which were also licensed and heavily regulated. And behind the scenes of this apparently rational bureaucratic structure, cliques of powerful, well-connected families actually tended to run things, from the shadows as it were.

Imports were controlled and industry was formally planned. Importing Coca-Cola for example was banned, to protect well-connected local firms in the soft drinks industry. Much industrial activity as well as excess population was directed to the overseas colonies.

For Portugal itself there was a sort of cult of simplicity and rural poverty, which the people were meant to live contentedly by. Life was about family, going to church and singing folk songs, and definitely not joining trade unions or asking for the right to vote. [1]

This had as a side effect the preservation of all sorts of rural crafts and skills. Folk music was encouraged, and lived on in various regional and occupational traditions into the current era.

Salazar's Portugal eventually switched sides in World War II, still supposedly neutral but now in practice backing the allies (from 1943 on). But after the war Portugal did not Americanise its society like elsewhere in Europe, or abandon its dictatorship.

When decolonisation came along in the 1950s Salazar tried to hang on to Portuguese possessions. In India this was to no avail. The Indian army simply invaded and annexed Portuguese territories, notably Goa, despite military resistance.

From 1951 the Portuguese constitution was changed to rename its African colonies as overseas provinces (províncias ultramarinas) of Portugal. The idea behind this rebranding was to dodge anti-colonial pressure, particularly from its western allies. The regime hoped that by styling Portugal as a single big "pluricontinental" nation, no one would notice that its overseas provinces were in fact still colonies.

This didn't work. The deal offered fell well short of independence. The dictatorship's attempts to hang on resulted in three wars starting in the early 1960s in its biggest colonies Angola, Mozambique and Guinea-Bissau.

These colonial wars had a much bigger impact on Portugal, with its small population of around 10 million (in Europe), than the Vietman war did in the much bigger USA. Conscription was universal for Portuguese young men, with the term eventually increasing to four years. Portugal's younger generation ended up fighting in Africa rather than developing the country, or fled abroad illegally in massive numbers to countries like France. Portugal's population actually declined in the the 1960s.

Another inevitable side effect of this controlled, repressive society, was that some people kicked against it. There was a considerable music of protest and political intervention. Music mattered to the Portuguese - and still does. Back then you could be dismissed, imprisoned or worse for singing the wrong song. But dissident music survived, inside the country where possible, outside with Portuguese living overseas and even among the troops serving in the endless colonial wars.

Peace and a difficult adjustment

After the Revolution of 1974 to 1975 previously forbidden foreign music flooded into the country. This included not just protest songs but almost everything from the 60s and early 70s, as a wide range of foreign music had been banned or just not played on the largely state-controlled media. Even today the Portuguese album charts feature surprising reissues of Anglo-American music from deep in the past, as there's a backlog of stuff the Portuguese didn't hear at the time.

As a result Portuguese musicians growing up in the last 50 years have had a range of extraordinary influences to choose from. On the one hand they could go back into their own country's varied, still living musical past. And on the other they had all the rest of the world - notably all of American, European and radical Brazilian music, which arrived in a torrent.

Some Portuguese artists have ended up working in identical idioms to mainstream western pop and rock, even to the extent of singing in English. But many were inspired by their own country's musical roots, or combined them with other influences while opting to still sing in Portuguese.

Music to the rescue

There was a lot to sing about, as the Portuguese went through enormous changes. Music, especially popular music, helps people make sense of their own life and dreams. At a broader level, it helps give a sense of where your country belongs in the world.

Portugal went very rapidly from an isolated, poor society with the worst literacy rates in Europe, high infant mortality rates, no divorce [2] and a limited role for women enshrined in law, to a normal first world western country.

At the same time the culture had to come to terms with the loss of a considerable overseas empire, and the arrival of at least half a million refugees from this now defunct empire into mainland Portugal. Plus the army coming home, most of whom now needed civilian jobs. And also the return of draft-dodging migrants and political exiles who had been living in France and elsewhere.

Why Portugal has such astonishing music

Portugal has very good music because the carriers of that music, the people, have had a lot of unusually intense experiences. The musicians among them have an unparalleled range of living musical traditions to draw on. Once banned from singing what they like, performers have now enjoyed almost 50 years of creative freedom.

If you compare it to the UK, there the country's very early industrialisation and urbanisation wiped out many traditions. That's why a lot of surviving folk music comes from the margins of the British Isles, or, written down in the 18th and 19th centuries, is of unknown authenticity. Similar disruptive factors were at play in the United States, a migrant society. There was a great loss of tradition. A high proportion of the American folk repertoire can be traced back to just a few individuals, such as the Carter family. Much was lost.

This is not the case in Portugal, where people still alive today were deeply imbued in a range of indigenous folk traditions. Portugal's "folk revival" started happening immediately after the Revolution of April 1974. Musicians and scholars of both left and right and no obvious affiliation started delving into the country's local traditions, partly in reaction to the flood of foreign music coming into the country. But also just to perform this music, or use it as an inspiration or starting point for new compositions.

Apart from this very unusual preserved heritage, Portugal is in other respects fully part of the wider western musical tradition. It is a Christian country speaking a Latin language, in touch with other European countries, as well as Portuguese-speaking countries around the world.

From a broader historical perspective the dictatorship period was an anomaly. Portugal was usually well connected, not culturally isolated, from the Siege of Lisbon (1147) onwards. Both Lisbon and Porto have always been major port cities. They had long-distance trade links and people coming and going from all over the world - and with them came diverse musical influences.

And today of course we have YouTube and Spotify, and lots of tourists visiting Portugal. The country has a prominent place on the commercial music circuit, with many visiting artists and music festivals.

This stops the music getting too weird. Portuguese music is intelligible to people from other broad musical traditions. It may sound distinctive, even wonderful, but it is not fundamentally incomprehensible to people familiar with other western musical forms.

Previous Post : Emanuel the Pimba king shows his sensitive side to Erika Ender